Choquequirao, is also known as the “sacred sister of Machu Picchu”, because its architecture and structure are similar. It is located in the eyebrow of the jungle near Cusco. Actually, it is the preferred trekking destination for visitors. And it is also considered, according to many studies, to be the Lost City of the Incas.

The word Choquequirao, (from the Quechua words “ chuqi” which means gold, and “k’iraw,” which means cradle. Thus, Cradle of Gold.

Choquequirao Archaeological Park is located at an altitude of 3033 masl. on the flanks of Salkantay Mtn. It is on the north side of the valley of the Apurimac River. It is in province of La Convención in the region of Cusco. Choquequirao is situated in the midst of various ecosystems, which vary from the land of eternal snow at 6000 masl.to the torrid, tropical valleys at 1800masl.

This great construction was built by the Incas. According to some archeologists, it was probably built during the reign of Pachacutec in the 15th century. Nevertheless, some experts think that it was actually built later, during the reign of Túpac Yupanqui or of Huayna Cápac.

It was most likely a religious center that was occupied by priests and consecrated to the Incan divinities. Still there are other studies which imply that Choquequirao was a great political and economic center, and that it controlled the commercial and cultural interchange among the coast, the mountains, and the jungle.

Choquequirao is a dispersed settlement. It is organized in an outstanding manner based on the distribution of its various enclosures. There are a number of features that are marvelous examples of hydraulic engineering. There is an extensive network of irrigation canals. These canals disperse water to the agricultural terraces on the hillsides, and take water almost down to the level of the Apurimac River.

This Archaeological Complex is divided into 9 distinct zones, that are like small villages which surround the main plaza. The main plaza, serves as a hub and contains walkways that come in from each zone. As of the present date, excavations have ascertained the locations of upper plaza (Hanan), the storage area (Qolqa), the main plaza (Huaqaypata), the lower plaza (Hurin), the system of agricultural terraces where important crops, were cultivated close to the main plaza (Chaqra Anden), the ceremonial platform (Ushno), and the living quarters of the priests which is located on the lower portion of the hill.

At Choquequirao, there are lots of two story buildings which have decorative or storage niches in the interior. Also, there are irrigation gates, canals, and channels. In the construction, the builders used stones that had been shaped and that were held together with mud mortar.

There is also a very widespread system of agricultural terraces. These are spread out all over the hillsides of the site. To the visitor these terraces appear to be walls that are carpeted by the semi-tropical vegetation. In just one system of these terraces there are 22 figures of llamas incorporated into the walls. These are known as “the llamas of the Sun.” These llamas are spread out over 15 terraces that face in the direction the snow-covered Apu, Q`ory Huayrachina.

How to get to Choquequirao?

The only way to get to the citadel of Choquequirao is overland. And the best known routes pass through the districts of San Pedro de Cachora and Huanipaca. The recommended route from Cusco is: Cusco – Cachora – Choquequirao. However, other secondary route, which is also a good option, is: Cusco – Huanipaca – Choquequirao.

From Cusco the road to Cachora or to Huanipaca the highway is paved. From that point on, there is a narrower, hard-packed branch road that leads to the capital of the district.

There is another route often traveled by trekking lovers. It is: Cusco – Santa Teresa – Yanama – Choquequirao – Cachora, or viceversa. That is, you can follow this route in either direction. You would start from Cusco via auto, and then set out walking from Sta. Teresa. The duration of the trek is 8 or 9 days. The distance that you would travel on foot is about 140 km. 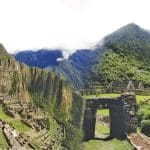 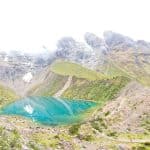 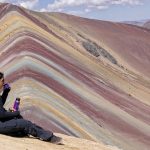